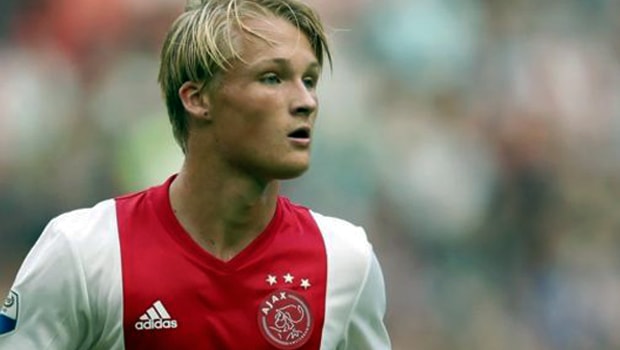 The 19-year-old only made the step up to the Ajax first team at the start of the season, but he has been one of their star performers throughout the campaign, scoring 22 goals in 43 appearances in all competitions.

The forward’s impressive form has played a major role in the Amsterdam club’s run to this season’s Europa League final where they will face Manchester United at Stockholm’s Friends Arena on Wednesday night.

Bosz has been impressed by Dolberg’s performances, insisting the Denmark international has all the credentials to become a world-class player.

“When we started the season he was one of our Under-19 players and in pre-season Ajax told me ‘take a look at this kid'”, Bosz said.

“If I put him in the team he plays a cup final in the Europa League and he is still only 19. He has big potential, a big talent.”

Despite the youngster’s potential, Bosz has refused to liken him to other Ajax greats like Dennis Bergkamp or current Manchester United star Zlatan Ibrahimovic.

“I hate comparing players, there is not another Ibra, or Dennis Bergkamp,” Bosz added.

“Dolberg is Dolberg, the only player with his personality. I hate comparing players.”

Dolberg scored in both legs of Ajax’s semi-final triumph over Lyon and he is priced at 3.00 to grab a goal during Wednesday’s final, with the Dutch club available at 2.75 to lift the trophy.