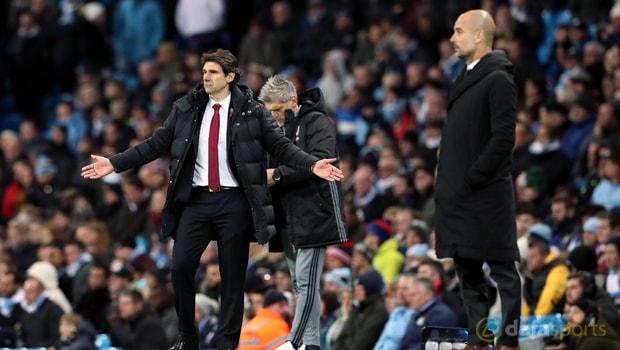 It was the second away game in succession that Karanka’s side had frustrated title-challenging opposition after their scoreless draw against Arsenal at the Emirates.

The Middlesbrough manager felt the 1-1 draw with Manchester City was a more impressive statement however, given that his players had to rally after Sergio Aguero opened the scoring for the hosts on the stroke of half time.

Pep Guardiola’s outfit dominated for long spell but Middlesbrough hung on gamely and they were rewarded with Marten de Roon’s injury-time equaliser securing a point.

Having fallen behind, Karanka said it was important that Middlesbrough carried some form of threat to Manchester City in the second half.

“It was an amazing result. In the first half we went on to the pitch with too much respect for them,” he said. “I told them at half-time we weren’t just there to defend and that we could play like we did in the second half.

I was pleased with our performance.” Middlesbrough have been resolute this season, losing just four of their first 11 games back in the top flight.

They have however managed to win just two games, leaving them with 11 points going into the international break. Karanka felt the draw with Man City was a step up on their impressive point against Arsenal, given the circumstances.

“Two weeks ago at Arsenal was more difficult than today because Arsenal didn’t score and we were organised. Our reaction was really good and it is a big step to showing how good we are,” he added.

Middlesbrough are 5.00 to be relegated this season while they are 6.00 to win their next game against Chelsea at the Riverside Stadium.