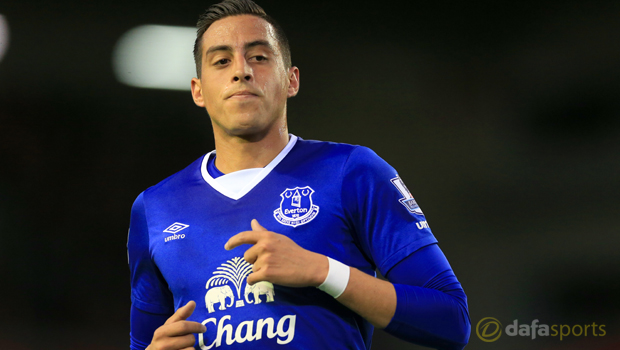 Ramiro Funes Mori’s agent has revealed Everton would be looking for a fee of around £23million if they were to sell him this summer.

The Argentine arrived at Goodison Park from River Plate last summer and made 37 appearances in all competitions in what was a difficult season for the Toffees.

Despite some occasionally uncertain performances, most notably when he was sent off in last month’s Merseyside derby, Funes Mori’s displays were generally solid.

At only 25, he also still has his best years ahead of him and has proved himself at the highest level, having recently been a regular for Argentina.

Despite only being in England for a single season, his agent Jorge Cyterszpiler has claimed Lazio have shown an interest in the left-footed centre-back.

The representative says the Italian giants have spoken to him about the defender and that the Merseysiders have placed a price tag of around £23million on his head in a bid to quell the interest.

That would be a steep rise on the £9.5million the Toffees paid for him last summer, especially as he is not certain of a regular place in the side.

Cyterszpiler clearly feels his client would be worth the money and believes a move could be in the offing if Everton’s valuation is met.

“Lazio are a great club, but Everton do not want to sell and evaluate him at more than 30 million euros,” he said.

“But football is strange and anything can happen.

He is among the best left-sided centre-backs in the world.”

Everton are currently 151.00 outsiders to win the 2016-17 Premier League title, with Manchester City the clear 2.63 favourites to top the standings.