Darts: Power survives but Barney’s out of World Matchplay 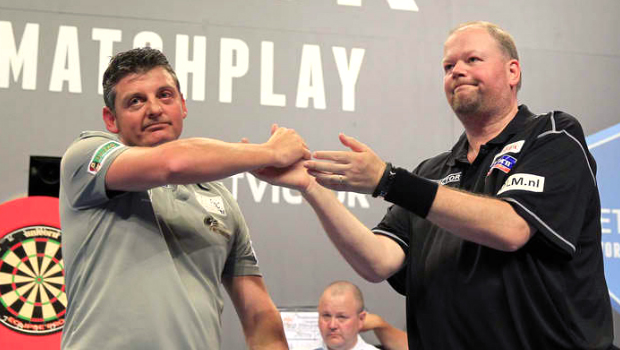 Raymond van Barneveld has been knocked out of BetVictor World Matchplay, but defending champion Phil Taylor survived a scare to stay in tournament.

Taylor, who has won the World Matchplay on 13 occasions, was pushed all the way by Terry Jenkins, before coming through courtesy of a 14-12 tie break victory.

Taylor was beaten by Jenkins on the Winter Gardens stage back in 2007, but there looked to be no danger of a repeat as he led 5-2 and 7-5, before Jenkins came roaring back to win five legs on the bounce to lead 10-9.

Taylor recovered to edge his way in front but back came Jenkins again to level at 12-12 and force a tie break, before Taylor claimed the next two legs to go through.

The Power is still on course to win his sixth straight Matchplay title and admitted his relief after the match.

“It was a fantastic game, the way he came back I’ve never seen anything like it – that was like the way Terry used to play, he’s had a bad year but now he’s on his way back again,” he said.

“I’ve just got to move on now to the next one, it’ll be a different kettle of fish. Justin’s style put Barney off a bit, but it’ll suit me down to the ground.”

Taylor will now face Justin Pipe in the next round after he pulled off a shock to knock out ‘Barney’ 13-9.

“To beat Raymond, a multiple world champion, is amazing,” said Pipe. “To beat him up there on the World Matchplay stage is awesome – I love him to bits, he’s my hero to be honest and to beat him up there is definitely the biggest win of my career.”