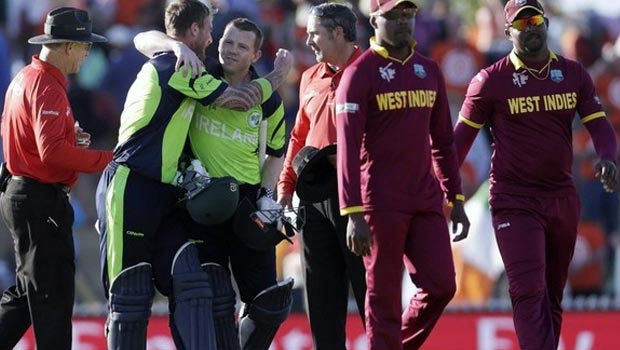 Ireland captain William Porterfield says his side aim to build on their impressive World Cup win over the West Indies and believes they can go further in the competition than many expect.

Ireland caused the first real upset of the tournament as they defeated the Windies by four wickets in Nelson.

It looked like a tough task for Porterfield’s side at the Saxton Oval after a Lendl Simmons century and 89 from Darren Sammy saw West Indies manage a decent total of 304.

However, the underdogs came through with a victory as, after losing Porterfield for 23, fellow opener Peter Stirling (92), combined with scores of 84 and 79 from Ed Joyce and Niall O’Brien, helped secure a memorable day for the Irish.

John Mooney struck the decisive boundary to hand Ireland a four-wicket win with 25 balls remaining and now Porterfield says they can build on their opening success.

“It is obviously fantastic to win” he said afterwards. “This sets us up nicely for the next few games.

“Belief has been growing within the squad for a long time and we know what we are capable of, not just in this game but the other games in the competition as well.”

Ireland are not expected to go deep into the competition, with co-hosts Australia (2.61 favourites to win World Cup) and New Zealand, the highly fancied South Africa and the likes of India, England and Pakistan all expected to make it to the latter stages ahead of them but this win will undoubtedly boost their chances of making the quarter-finals at least.

Ireland return to World Cup action when they take on the UAE in Pool B on February 25.