ODI Series: England have the edge for decider – Morgan 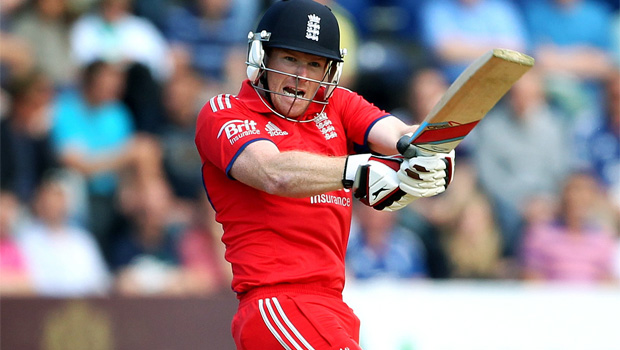 England were trailing 1-0 going into the fourth game of the five-match series in south Wales and were left chasing a victory total of 228 after Australia lost their final five wickets for just 18 runs to fall to 227 all out, with James Tredwell taking 3-53.

Morgan, who was made skipper for the ODIs in the absence of the rested Alastair Cook, led from the front with a solid 53 in a 108-run stand with Michael Carberry (63) after the hosts were earlier left reeling on 8-3 thanks to Clint McKay’s impressive hat-trick.

However, England looked out of the contest when they were struggling on 144-6, needing 84 more runs from just over 11 overs.

But an explosive 65 not out by wicket-keeper Jos Buttler, backed by a 25 from young Durham all-rounder Ben Stokes, ensured England turned the match on its head to line up a mouth-watering deciding game at Southampton on Monday.

Morgan feels England now have the momentum going into the game and is confident they can see off Michael Clarke’s men to clinch a 2-1 series victory.

“We can go into that match with real confidence and the feeling that we have a chance to win the series, and we must grab it with both hands,” said Morgan.

“If we win the fifth game then it will have been a very successful summer not just for the Ashes team but also the limited overs side. So it is a big match for us.”

He added: “Winning a game like we did today will give the guys an enormous lift. The dressing room was very lively and excited at the end, and you want to it to be like that.”