Posted by Vincent Henderson on September 14, 2014 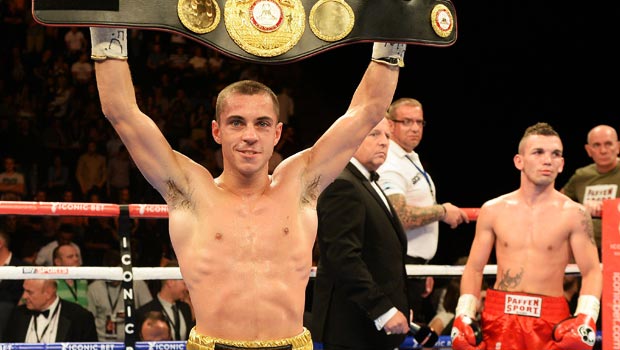 Scott Quigg impressively defeated Stephane Jamoye inside three rounds to retain his WBA super-bantamweight belt and then insisted that he wants to make a unification fight happen with IBF champion Carl Frampton.

The Bury fighter showed his steel and power in this latest bout against the 24-year-old Belgian, who had stepped in as a replacement opponent.

Jamoye looked bright in the opening two rounds, but Quigg brushed off his attacks and hit back late on in both with some powerful head and body shots.

It was all over in round three when Quigg caught Jamoye with three stiff punches to push him back onto the ropes, before delivering a huge body shot to leave him on the canvas.

Quigg, who stretched his unbeaten record to 31 fights with 29 wins and two draws, has won his last three inside the distance.

And he is now looking to meet Northern Irishman Frampton after he defeated Kiko Martinez last week to claim the IBF belt, while WBC champion Leo Santa Cruz is also on his radar.

He told Sky Sports: “Yes I was happy with that. Went in and systematically broke him down in three rounds. No-one has done that.

“Anyone is a threat who gets in that ring. It only takes one punch to change a fight. I give everyone respect who gets in there. No matter how much of a threat people think he was, he’s still got a chance of winning and I didn’t take my eye off the game.

“If he wants to sit down in a room, Carl, Barry (McGuigan), me, Eddie (Hearn), that fight can be made. There is also Leo Santa Cruz, who fights tonight, he is another fight I want.”