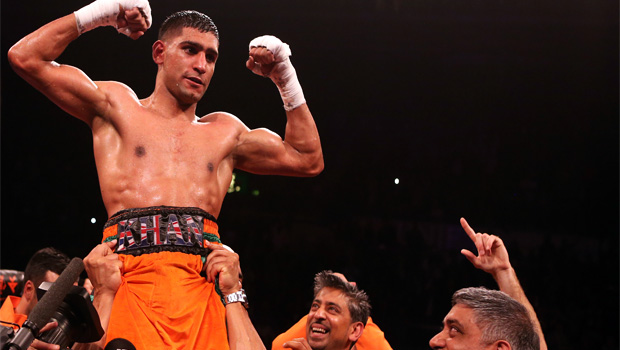 Amir Khan has been told he needs to show more dedication to boxing if he is maximise his potential and take on Floyd Mayweather.

The warning has come from Khan’s trainer Virgil Hunter, who says the former light-welterweight world champion has to knuckle down more if he is to be up there with the best.

Next up for Khan is a clash with IBF welterweight champion Devon Alexander in December, and he has the chance to become a two-weight world champion.

Victory would also give the 26-year-old a chance of taking on Mayweather in a lucrative fight next year, but Hunter says the Bolton-born fighter needs to get serious if he is to have a chance.

Khan watched from ringside as Mayweather stretched his record to 45-0 when defeating Saul Alvarez for the WBC and WBA light-middleweight titles, and Hunter says his man needs to be more like the American with the way he approaches the sport.

“If he is going to be really competitive, he has to show the same dedication and desire Floyd Mayweather shows. If he doesn’t he will have a tough night,” Hunter said in The Times.

“If he changes his ideas and really commits to boxing and really becomes driven to be great in the sport, then I think he could grow very quickly.

“Amir has a lot of potential and a lot of ability and he has to maximise what he has and make it his priority if he wants to be great.

“You can’t take months off boxing, running here and there and there, and think you can come into an eight-week camp and perform at the best of your ability.

“You have to live the life, I am not afraid to tell him that because I am trying to get the best out of him.”