Posted by Vincent Henderson on November 13, 2013 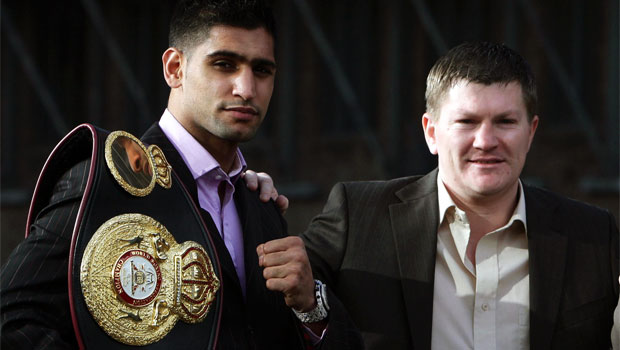 Former world champion Ricky Hatton believes Amir Khan could give Floyd Mayweather “his biggest problem” if the pair meet in the ring next year.

Rumours around the sport suggest that Khan will finally get his chance to face Mayweather next May for the WBC welterweight title.

Recent reports suggest the pair could meet on May 3 in 2014 but neither fighter has yet to confirm a date has been made.

Khan was due to face IBF welterweight champion Devon Alexander this winter, but the American, who was also supposed to face fellow Brit Kell Brook, has claimed Khan pulled out.

Several critics suggest Khan has got lucky with the opportunity to face Mayweather, having never fought at the 147lb limit. Despite the critics, Hatton has backed Khan to match Mayweather for speed and he believes he could give the pound-for-pound king a number of problems.

However, Hatton, who lost to Mayweather in the latter stages of his career, has warned Khan he must box smart and not rush in, with questions about his chin still to go away.

“Amir could give him his biggest problem if Amir doesn’t get drawn in, uses his speed and shows loads of movement,” Hatton said on Sky Sports News.

“Amir is the only one that could probably match Mayweather for speed.
Amir’s problem, style-wise and he’ll probably tell you this himself, is he likes to have a fight and he’s not built to have a fight.

“His best attribute is his boxing ability and his hand speed.”