Gennady Golovkin not hanging around for Canelo Alvarez 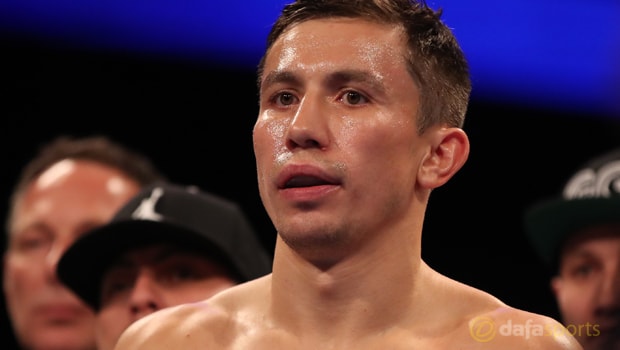 Middleweight king Gennady Golovkin says his legacy will not be defined by a rematch with Saul Alvarez and accepts his career may now take him on a different path.

A first fight back in September last year in Las Vegas ended in a controversial draw and ‘Canelo’ was then forced to withdraw from a much-anticipated pay-per-view second meeting with the Kazakhstan superstar after he was banned for six months for failing two drugs tests.

‘Triple G’ steps back into the ring for the first time this weekend when he takes on replacement opponent Vanes Martirosyan at the StubHub Center in Carson and says his motivation has not been dented by the controversy surrounding Mexico’s poster boy.

“I feel very happy that it’s all been resolved and I’m going to be fighting in a very important fight where several belts will be at stake and I think the audience will enjoy it,” Golovkin told reporters.

Alvarez’s ban has been backdated, so he will be free to fight from August 17, and Golden Boy Promotions is hoping he will be back in the ring in September for Mexican Independence Day weekend.

But GGG says he has no intention of hanging around for Canelo and believes others deserve their chance to try and dethrone him as the undefeated WBA, WBC and IBF champion.

“Boxing does not revolve around Canelo. There are a lot of other fighters in the middleweight division who deserve to fight for a title,” he said.

“There are a lot of guys available that the public needs to focus on instead of a guy that’s refusing to comply with the rules,” he told reporters.

“The middleweight division is vibrant. If Canelo’s not available who cares? We have to be concerned with Gennady’s career, nobody else’s career.”

Golovkin is currently priced 1.02 in the fight prices and the draw outcome is quoted 26.00, while Martirosyan is trading at 15.00 to spring the upset.