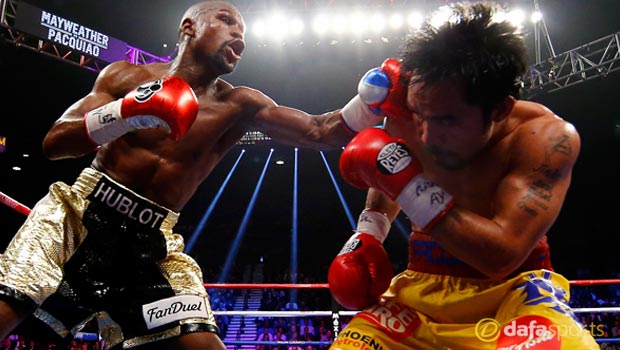 Floyd Mayweather confirmed after beating Manny Pacquiao in the most lucrative bout in history that he will retire in September.

The 38-year-old American was awarded a unanimous points decision in Las Vegas after dominating the fight.

He said after his latest triumph: “My last fight is in September and, after that, I am hanging them up.

“I’m nearly 40 years old, I have been in this sport for nearly 19 years and I’m truly blessed. I am fighting again in September.”

Six-weight world champion Pacquiao, 36, played his part in a cagey affair, but was always second-best against the canny Mayweather.

Mayweather was particularly impressive in the closing rounds as Pacquiao tired, his jab proving very useful.

“Money” said after the bout: “He’s a hell of a fighter. I take my hat off to him – I now see why he is one of the guys at the pinnacle of the sport of boxing.

“I wasn’t hit by a lot of shots until I sat there in the pocket. We took some shots but we did what we had to do tonight.”

Amir Khan is on the list of possible opponents for Mayweather in September, as is fellow Briton and IBF welterweight champion Kell Brook.

If Mayweather can win his final fight in four months’ time, he will move level with the legendary Rocky Marciano with an unbeaten record of 49-0.