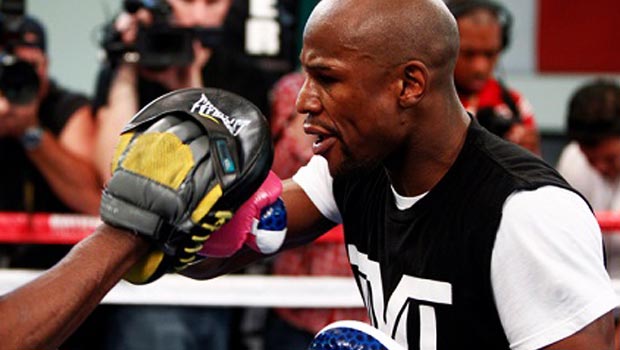 The uncle of Floyd Mayweather claims he is “annihilating everybody” he comes across in sparring as preparations continue ahead of his eagerly-awaited showdown against Manny Pacquiao on May 2.

The 38-year-old undefeated American will look to make it 48 career wins and retain his WBC and WBA welterweight belts when he faces the 36-year-old Filipino at the MGM Grand in Las Vegas.

Eight-division world champion Pacquiao will put his WBO belt on the line as the two fighters also battle it out for the title of the world’s best pound-for-pound fighter.

Pacquiao has already revealed that he is confident of becoming the first man to inflict defeat on Mayweather, but it seems ‘Money’ is a man on a mission in training.

His uncle Jeff Mayweather has lifted the lid on his progress and claims that he is working his way through sparring partners at a fast rate because they can’t cope with his powerful punches.

“The kids, early in camp, they don’t care that he’s Floyd Mayweather. They want to prove something. They’ve proved something, all right. They’re getting destroyed,” he told MLive.

“He’s annihilating everybody. He’s a beast. This isn’t the same old Floyd.”

Former undisputed welterweight champion Zab Judah was drafted in but he also had to leave the ring because he was taking a battering and has a big fight coming up.

Jeff Mayweather added: “It may just be his mind, and all the **** he’s been dealing with Manny over the years.

Obviously, he’s taken that in some kind of way. I mean, he’s punishing these guys.”