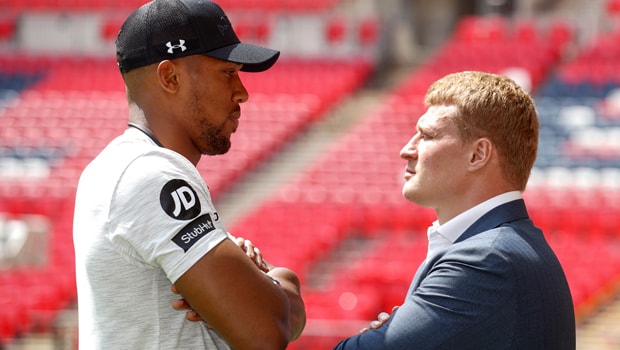 Promoter Eddie Hearn insists Anthony Joshua is only focused on Alexander Povetkin and has not even watched Tyson Fury’s recent fight.

Joshua will take on the hard-hitting Russian next month when the pair meet at Wembley Stadium on September 22.

The Brit will defend his IBF, WBA ‘super’ and WBO titles in London but more big fights are in the pipeline for the Olympic gold medallist.

Joshua remains in camp for his latest defence and talks are still ongoing for a unification fight with WBC champion Deontay Wilder.

Rivals Fury and Wilder could also meet after the former beat Francesco Pianeta but Hearn insists his fighter has not even watched that bout due to his intense training.

He told Sky Sports: “I said to him, ‘Did you watch that?’ and he said ‘What?’ “It was later that night and I said ‘The Fury fight?’ He said ‘No, what happened?’ “He’s so focused on this camp, because he knows about Povetkin. People in boxing know about Povetkin.

Anyone you ask in boxing goes: ‘It’s a tough fight.’ “His frame of mind is really, really focused.

I don’t think he’s taking a lot of interest in the outside world around this fight, because he knows what’s at stake.

Obviously people have told him he might be fighting [the winner of] Fury-Wilder, but he’s just going to concentrate on what we’re doing.

Joshua remains the heavy favourite and he is 11.00 to win inside the fourth round.