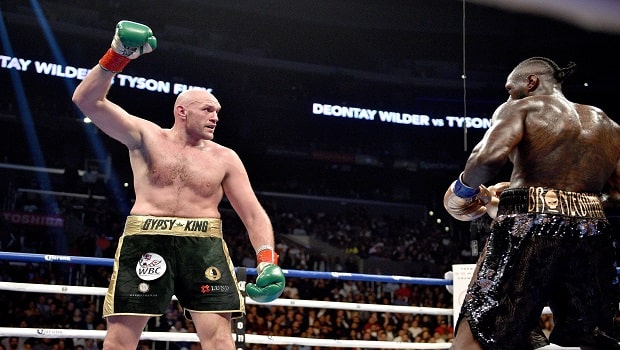 Deontay Wilder insists a heavyweight unification fight with Anthony Joshua can wait as he is still determined to have a rematch with Tyson Fury next.

Joshua is the reigning IBF, WBO and WBA and heavyweight king and the Briton insists he wants to face undefeated WBC heavyweight champion to unify the division.

A row exploded between Joshua and Dillian Whyte immediately after the latter had secured an 11th-round knockout win against Dereck Chisora at London’s O2 Arena on Saturday night.

Whyte, who suffered a seventh-round stoppage defeat against Joshua more than three years ago, challenged his fellow Brit to give him a rematch but ‘AJ’ suggested his focus is on getting that bout with Wilder.

Wilder however has his sights firmly on a second Fury showdown on the back of their controversial split-decision draw in Los Angeles at the start of December. The American says the manner of that bout means the ‘world is watching’ and expecting a rematch. He told Fight Hype:

“I’m going with Tyson Fury. For sure. We’ve got to do the rematch. It gotta come right back. It was a controversial fight and when it’s like that you’ve got to come back.

“There can’t be no draws. There’s a winner and a loser – you know what I’m saying? “I’ve been travelling nonstop since that fight, and you gotta have the rematch because people are continually talking about it.

“The heavyweight division is lit. So we’ve got to keep it flaming up, keep adding that log to it.”