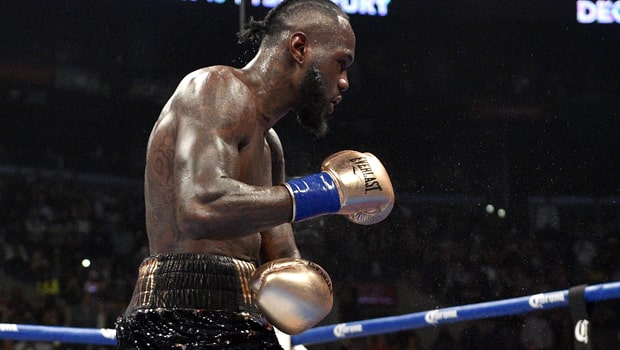 The American kept hold of his title after his ninth defence thanks to a thrilling first-round knockout win. Wilder hurt Breazeale inside the first 30 seconds before then getting rocked himself.

As his opponent tried to compose himself, Wilder unleashed another powerful right hand which sent Breazeale crashing to the canvas.

The ‘Bronze Bomber’ remains undefeated in his career but a fight with WBA ‘super’, WBO and IBF world champion Joshua has yet to be finalised.

Joshua is next in action on June 1 against Andy Ruiz Jr and Wilder believes they could meet later in the year.

He told Sky Sports: “I’ve got a lot of obligations to fulfil. But if that date is open for me you may see Deontay Wilder there.

“When it’s a good scrap, a good fight that people want to see, you might find me there. I can’t say right now, I can’t promise you that but when that time comes we’ll see what happens.

“The heavyweight division is so lit right now, it’s on fire right now. I think it is our obligation, our duty to give the fans what they want.

“I just want people to have patience, and with patience comes time and just let us have our moments and let us do what we do.

“When things go silent, that’s when the magic happens. It may not come when you want it, but it’s always on time.”

Joshua remains the heavy favourite to win next month and he is priced at 7.50 to win in the third round against Ruiz Jr.