Posted by Vincent Henderson on December 10, 2017 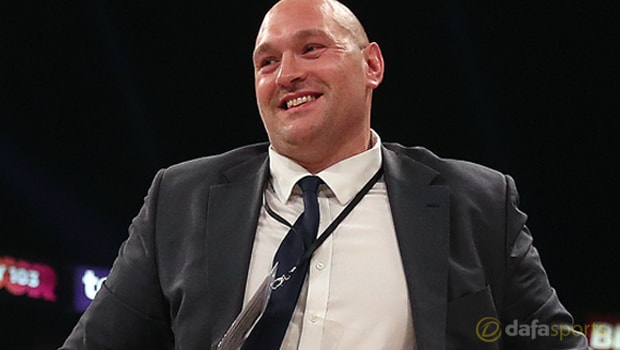 Former world heavyweight champion Tyson Fury has vowed to knockout Tony Bellew in 2018 as the pair look to finalise a fight.

The 29-year-old is back in training and trying to lose weight after two years out of the ring.

He has not fought since dethroning Wladimir Klitschko in Germany but the Manchester fighter is desperate to reclaim his titles.

“the presence of a prohibited substance” in June 2016.

Bellew is open to a bout as long as he beats David Haye on May 5, with the pair set to meet in a rematch after Bellew won the first fight back in March.

In recent weeks, a potential bout between Fury and Bellew has been mentioned and Fury told Soccer PM he would cruise to victory.

“I’m a bad man, I’m a pretty hard character to beat in the ring, and my unorthodox approach comes as a bit of a shock to everybody.

I’m anything but textbook,” he said. “Bellew? I quaking in my boots.

I don’t know what weight division he is, light-heavyweight, cruiserweight, heavyweight, what is he?

“I did say that if Tony Bellew signs a contract then it will be a ceiling job and that means an uppercut, and bang he hits the roof.

“They may call you the bomber, but unless you have an atomic bomb then ‘The Furious One’ will annihilate you.”

A potential clash could be the third British grudge match of the year, although there are doubts still surrounding Haye’s fitness.

Super-middleweights George Groves and Chris Eubank Jr are also set to meet in February, with the former the outsider.