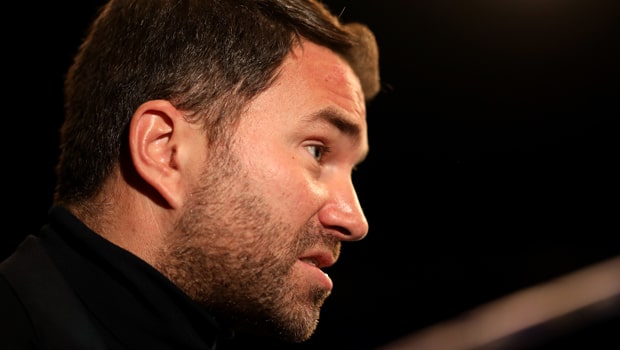 Promoter Eddie Hearn has hinted that a potential mega unification fight between Anthony Joshua and Deontay Wilder has edged closer in recent days.

The two camps have been unable to agree a fight in the last 12 months, with Hearn growing frustrated at a lack of contact from Wilder’s camp. With talks at a standstill, Joshua decided to defend his WBA ‘super’, WBO and IBF world titles against Jarrell Miller.

The duo will meet in New York on June 1, while WBC champion Wilder is yet to finalise a date for his next fight. His clash with Tyson Fury fell through and the American has now been ordered to take on fellow American Dominic Breazeale.

Hearn and Joshua are doing all they can to make him the undisputed heavyweight champion of the world and the former admits talks are now encouraging.

“It’s very encouraging,” Hearn told Sky Sports. “I’m not going to say too much on it, because I don’t want to jinx anything. But I think there’s an opportunity there for someone to be a mediator to get the fight done.

“Clearly, the relationship between Team Wilder and Team Joshua is not the best. I think this is a route that is going to be very beneficial to the making of that undisputed fight.

“Wilder’s going to fight Breazeale, that’s his mandatory. Joshua fights Miller. If an undisputed fight gets made it will be November or December 2019. But still a couple of hurdles.”

Joshua remains the heavy favourite to beat Miller and he is priced at 26.00 to win in round one.