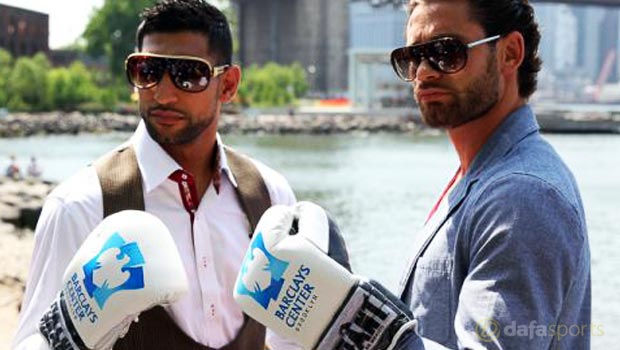 Amir Khan admits he will face a tough test when he steps into the ring with American Chris Algieri on Friday night.

The Bolton fighter is looking to extend his three-year unbeaten streak and add to the momentum that seems to be building behind what could be a potentially epic bout with Floyd Mayweather later this year.

He faces an extremely tricky opponent in Algieri who, despite losing in his last outing to Manny Pacquiao, had previously gone unbeaten in his 20 fights as a professional.

The former kick-boxer is also likely to have the Brooklyn crowd on his side, having grown up close to New York and, although Khan is hugely popular in America, it could prove to be a partisan atmosphere as the locals try and cheer their boy on to the WBC Silver Welterweight title.

Khan accepts his rival provides a huge threat to his unbeaten run and is expecting an extremely tough test at the Barclays Center.

“I always said that I want to come over here and give New York a huge fight, bring boxing there,” he World Boxing News. “I have a big fan base from New York. “I’m sure Chris Algieri also has a big fan base there as well. But we’re going to come and make some noise.

“It could be dangerous for me coming into this fight if I’m not on my “A” game.

“I have to be one step ahead and make sure I don’t make any mistakes. Chris Algieri is a guy that if you make a mistake, he’s going to make you pay for it.”