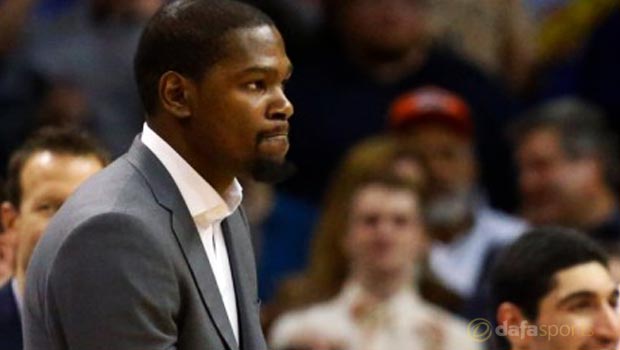 Oklahoma City Thunder are hopeful star small forward Kevin Durant is close to full fitness and will be ready to go when the new NBA season gets underway.

The 2014 MVP suffered a catalogue of injury problems last season, undergoing surgery on his right foot in October last year, before suffering an issue with his ankle and then further problems with his foot which necessitated another minor operation.

However, Thunder general manager Sam Presti says Durant is now able to play a full part in team practices, having also been spotted on the sidelines during the NFL clash between the Washington Redskins and the New York Giants.

Presti told ESPN: “He’s been playing without restriction, 5-on-5 and competing as normal.

“With that said, as any of our players coming off injury, we’re going to be watching and managing practice, recovery time. But as far as limitations, he doesn’t have any.”

The Thunder, now under the charge of new head coach Billy Donovan, start their NBA campaign with a tough assignment on home court against the San Antonio Spurs on October 28.

Oklahoma missed out on the play-offs last season as both Durant and Russell Westbrook were hit by injuries, having reached the post-season in each of the previous five campaigns.

They reached the Conference finals in three of those five years, reaching the NBA Finals in 2012, when they were beaten 4-1 by the Miami Heat.