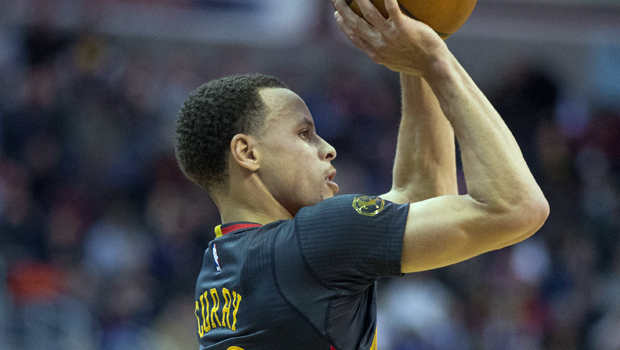 Stephen Curry says it feels great to set a new NBA Finals record and he has urged the Golden States Warriors to keep their foot on the pedal after taking a 2-0 lead in the best-of-seven series against Cleveland Cavaliers.

The Warriors, who defeated the Cavs 4-1 in last year’s finals, won the first game 124-114 at the Oracle Arena and they managed to keep that momentum going in Game Two.

In front of another packed crowd in California, Golden State recorded a 122-103 victory to move 2-0 up in the series and move to within just two wins from their third title in four years.

Curry was the mastermind behind the win as he scored nine three-pointers, surpassing the previous record of eight three-pointers set by Ray Allen with the Boston Celtics in 2010.

It was a sensational performance from the 30-year-old, who top-scored with 33 points, and he is hoping to keep that form going for the remaining matches.

“But at the end of the day, it’s all about trying to get a win and doing whatever you can to make that happen.

“Pretty special night, and hopefully some more special things happen and we get two more wins.”

Warriors coach Steve Kerr also lauded the performance of Curry, saying: “He was tremendous. You know, nine threes and seemed to hit the big shot every time we needed one.”

Game Three takes place in Cleveland on Wednesday and LeBron James, who was restricted to 29 points on Sunday night, will be hoping to chalk up a first win for the Cavs.

Golden State are firm 1.02 favourites to win the NBA Finals whilst Cleveland are massive 12.00 outsiders to turn things around.