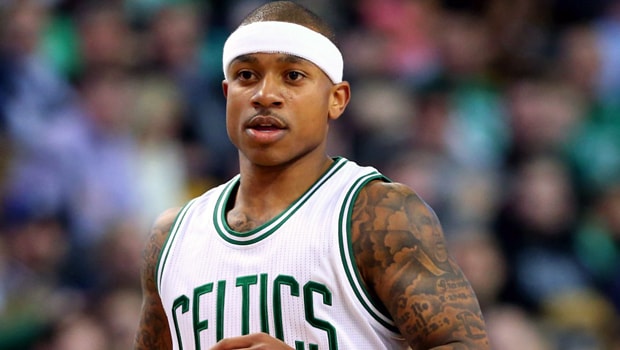 Chicago’s hopes of beating Boston Celtics on Thursday could hinge on how well they cope with Isaiah Thomas, according to Bulls coach Fred Hoiberg.

Boston have lost just once in their last 12 outings ahead of their trip to the United Center and Thomas has been key to that impressive run.

The Celtics guard tied John Havlicek’s franchise record of 40 consecutive games scoring at least 20 points with a 33-point haul against the Philadelphia 76ers last time out, and Hoiberg is well aware that keeping Thomas quiet is crucial to the Bulls’ chances of victory.

“He’s incredible, the way he can get shots up,” Hoiberg told CSN Chicago. “He’s a great finisher in the paint.

They do a great job of running a lot of actions for him, coming off to his left hand, where he can stop on a dime and pull up from anywhere.

It’s a full-team problem. You have to make sure you’re aware of where he is at all times.”

Boston are battling Cleveland Cavaliers for top spot in the Eastern Conference and are seeking a fifth successive victory on Thursday but they are without guard Avery Brown and forward Jaylen Brown.

Chicago look well placed to secure a spot in the post-season but a serious tilt at the Championship appears unlikely after a mixed campaign so far.

The Bulls did snap a three-game losing streak with a win over Toronto in their last game and Hoiberg believes, if they can match the energy in defence they showed against the Raptors, they can be a match for any team in the NBA.

“I think the reason we were able to play with pace is because we were getting stops,” he said. “I thought our defensive energy was the best it’s been in a while.

We held that team to 18 in the first quarter and had a great first half, which allowed us to get out and play with pace, and play the way we want to.”

Chicago could be without star guard Dwyane Wade and reserve forward Nikola Mirotic against the Celtics, while rookie Paul Zipser seems set to miss out. Boston are 2.00 to come out on top and Chicago can be backed at 1.85.