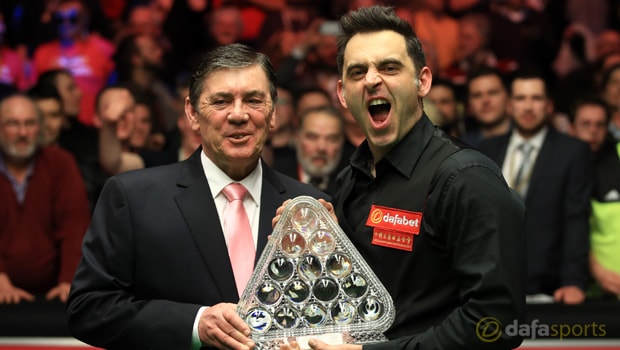 Ronnie O’Sullivan believes he can overtake Stephen Hendry’s record of 18 major titles after claiming the Dafabet Masters crown on Sunday.

O’Sullivan beat Joe Perry 10-7 to take the title, landing the Masters for a record seventh time.

O’Sullivan is level on five UK Championship crowns with Hendry although the Scot has claimed the World Championship trophy on seven occasions, while ‘The Rocket’ has managed five at the Crucible.

Hendry has 18 majors to O’Sullivan’s 17, with Steve Davis also taking 17 of the big prizes during his career at the top level.

The 41-year-old admits time is against him although he is confident he can still challenge for the biggest prizes in snooker for a number of years yet.

“I am knocking off Stephen Hendry’s records gradually, and I feel like this win has given me a bit of belief,” he said, as reported by The Telegraph.

“I was beginning to doubt myself thinking, ‘I am 41, I shouldn’t really be competing against these guys’. Now I have got this one in a major tournament again maybe I can go on and get a few more.

And, if I am 51, then I can compete with 41-year-olds. That is how I motivate myself. I am good enough to give myself that test.

I try not to look at the age but the facts, and I will keep going until the wheels fall off.”

O’Sullivan is 5.50 to win the World Championship at the end of the season, world number one and defending champion Mark Selby is 6.00 and 2016 runner-up Ding Junhui can be backed at 11.00.