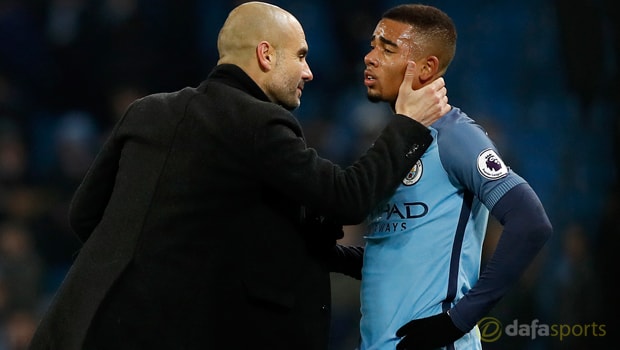 The 19-year-old signed for Manchester City over the summer for a reported fee of £27million but he remained with Palmeiras until this month.

The forward is seen as one of the top young talents coming out of Brazil, having scored four goals in his first six caps for the national side.

Jesus was also part of the Brazilian Olympic squad which won an Olympic gold medal on home soil over the summer and Carlos expects him to be a success in Europe.

Pep Guardiola drafted in Jesus to bolster his attacking options and ensure City can challenge for silverware during his time at the helm.

City, who are priced at 1.67 to finish in the top four, currently look unlikely to push for the Premier League title this season but remain in the Champions League and FA Cup, while a top-four finish is still not guaranteed.

Carlos, who enjoyed an impressive career in Europe, has called for patience with the teenager as he looks to find his feet in the Premier League.

The City newboy made his debut over the weekend in the 2-2 draw with Tottenham at the Etihad Stadium, coming off the bench on 82 minutes.

The Brazilian headed one chance narrowly over the bar and had a goal ruled out for offside too and Carlos feels it is essential the Citizens don’t put too much pressure on his young shoulders.

Carlos said: “Gabriel will be very important for Manchester City but he needs time to adapt.

“I would ask that people don’t put too much pressure on him too soon.”