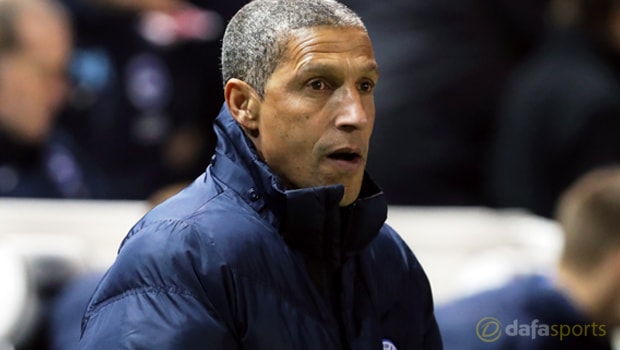 Chris Hughton paid tribute to the patient approach of his Brighton team after they returned to the summit of the Championship.

Brighton took advantage of their game in hand as they overcame stubborn Cardiff City by a single goal at the Amex Stadium to leapfrog Newcastle and move to the top of the standings.

Tomer Hemed fired the crucial goal for Brighton 17 minutes from full-time. Hughton’s men had been under pressure in the first half, with goalkeeper David Stockdale on hand to deny Kenneth Zohore.

Neil Warnock’s Cardiff side attempted to frustrate their hosts the longer the game remained scoreless and Hughton had plenty praise afterwards for his team.

“They’ve got good players in their team and we had to be patient and look for the opportunities,” he said.

“The league is too tough to be able to expect anything different than what we expect, and that’s everybody behind us in the table really pushing.”

The former Newcastle boss will not be writing his former club off just yet but Brighton’s form remains a source of encouragement that they can finally land a Premier League berth after some agonising near misses in recent seasons.

Brighton have now won 11 of their 14 home league games this season, losing just once at the Amex Stadium.

Hughton’s men are 2.37 to win the Championship, while Newcastle are favourites at 1.67.